November 28, 2016PublikacijeComments Off on Alternative CEDAW Report – Report by Organisations of Civil Society on the Application of Concluding Observations and Recommendations of the CEDAW Committee for Bosnia and Herzegovina 2013-2017 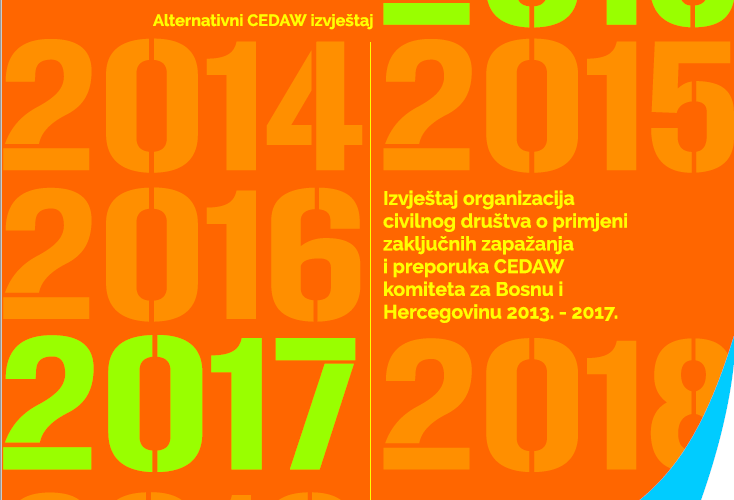 THE ALTERNATIVE CEDAW REPORT is the result of common work of activists and organisations of civil society from the whole of Bosnia and Herzegovina which gathered data, analysed the current condition and defined specific and general recommendations which seek urgent, continued and systemic acts by government institutions on all levels in the direction of allowing the women of Bosnia and Herzegovina an unencumbered and non-discriminatory access to achieving basic human rights and liberties.

The report follows the concluding observations and recommendations of the CEDAW Committee from 2013 directed to the institutions of Bosnia and Herzegovina and covers areas in which activists and organisations of civil society have already identified problems, the infringement of rights or discriminatory practices directed against women.

Over 20 organisations of civil society participated in creating the Report, whether directly or indirectly, with the “Helsinki Citizens Assembly” from Banja Luka and “Rights for All” from Sarajevo providing coordination.

With the creation of this, fourth in a line Alternative Report, the organisations of civil society from BiH have demonstrated a dedication to the thorough following and support of the application of the UN Convention on Eliminating all forms of Discrimination Against Women (CEDAW), which represents one of the most important international documents for the protection of women’s human rights. Activists have not only identified and argumentatively presented the key problems with which women in BiH face, but have also addressed those responsible for the lack of solutions and suggested concrete measures for improving conditions in line with stipulations by the CEDAW Convention.

The first report on the state of women’s human rights in Bosnia and Herzegovina was prepared in 1999 in association with the Global Rights organisation and women’s non-governmental organisation in BiH, the second report was prepared in 2004 in association with Global Rights and a coalition of 16 women’s non-governmental organisations in BiH, the third report was prepared in 2013 wit the coordination of Rights For All Sarajevo and Helsinki Citizens Assembly Banja Luka and the participation of eight organisations which act in the area of protecting women’s human rights and gender equality.